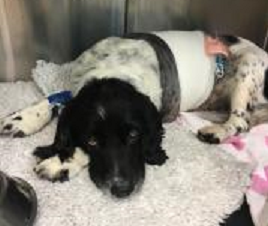 Rico is no spring chicken, but this gorgeous boy proved there was plenty of fight in him left when he underwent open chest surgery at our Torquay surgery at the end of 2017.

Rico came in to see vet, John, after his owner had noticed his breathing was becoming raspy. John was concerned that Rico’s lungs sounded noisy and there was increased effort with his breathing.  He recommended further tests, including chest x-rays.

The investigations revealed evidence of a mild pneumonia, which was treated with antibiotics, but more worryingly there appeared to be a tumour in one area of the lungs. Rico was referred locally for a CT scan (a 3D x-ray), which confirmed there was a lung cancer growth in his chest.  Fortunately, however, there was no evidence at this stage that the tumour had spread. 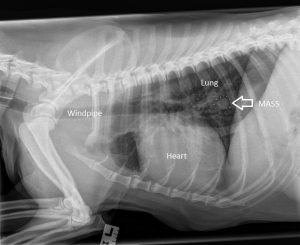 It was recommended to remove the lobe of lung containing the tumour. This would require open chest surgery, and required a big decision to be made by Rico’s devoted owner.

Rico’s owner decided to go ahead with the surgery. Vets John and Samantha operated on Rico with a team of veterinary nurses. During the surgery Rico’s breathing was controlled by our automatic ventilator. Rico’s chest was opened and the lung lobe containing the tumour removed with a special surgical stapling device. Despite the invasive nature of his operation, Rico recovered uneventfully and stayed with us for just a few days during which time he had drains in his chest and was on a number of painkiller medications. On his first night after the surgery, one of the nursing team, Hannah, spent the night with him at the surgery to make sure he remained comfortable. 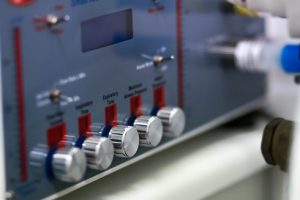 The tumour was sent to the lab, and was confirmed to be a type of malignant cancer originating from the lung. It is expected that the surgery will be curative. Had the tumour been left it would have continued to grow and Rico would likely have succumbed due to the effects of the cancer.

Since the operation Rico has recovered well and we all hope he continues to be fit and healthy. He is certainly one of our hero patients of 2017!