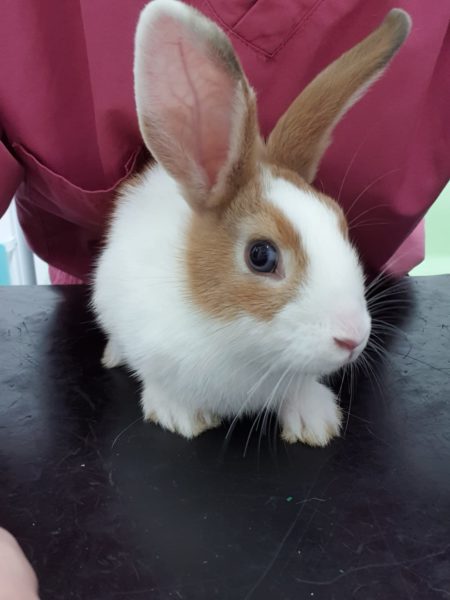 Rabbits and guinea pigs are the next most common pets we treat at Greenbay Vets, after dogs and cats. We also have visits from rats, mice, hamsters, gerbils, ferrets, tortoises, lizards, parrots and occasionally more unusual pets or zoo animals! In the veterinary profession, the term ‘exotic pet’ is used widely to describe these animals.

Since 2018, we have been able to offer clinics with Ian Sayers, an Advanced Practitioner in Zoological Medicine.  Ian has a special interest in the veterinary care of rabbits, guinea pigs and exotic pets/zoo species and a wealth of experience in diagnosing, anaesthetising and treating these species for over 25 years. Ian is holding clinics in our Torquay surgery on weekday mornings (9.30-10am) – to book an appointment with Ian please call the surgery on 01803 606059.  To register your pet with us, you can use this form.

Many of the ‘exotic’ species kept as pets are prey species i.e. hunted (mostly by other animals) as a food source in their natural environment. Most of these animals have developed behaviours and mechanisms to hide signs of disease (so they don’t get eaten) until they are so ill that they cannot hide it any more, and may appear to be suddenly ill. This means that when you see that your pet looking ill, they may be much sicker than first thought. Certainly, they are frequently more ill than is the case when illness is first observed in cats and dogs. It is important that you seek prompt veterinary attention for all your pets, possibly more so for your ‘exotic pets’.

These animals are so good at hiding signs of disease that we rely on diagnostics more heavily than may be the case initially for your cat or dog. Typically initial investigation of an ‘exotic pet’s’ state of health requires x-rays and blood sampling under anaesthetic. We are aware that these costs can add up so we recommend considering insurance for all your pets.

Some animals can be more challenging than others to get adequate samples – even with Ian’s experience! Frequently it can be size related for commonly kept small species e.g. leopard gecko’s; budgerigars; or young/neonates of some species.  There are size limitations for some diagnostics e.g. blood sampling. Some of the species we commonly see do not possess a large enough blood volume in their whole circulation to enable us to take a large enough sample for analysis. This can be compounded by the fact that needles are not made small enough to be able to take a sample from some pets.  In these cases we try our best to perform as much indicated diagnostics that size will allow, in order to try and help your pet as much as possible. 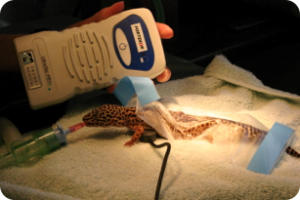 We have invested in special dental equipment for rabbits and rodents for whom dental disease is a common problem, and are pleased to now have a separate hospitalisation area for exotic pets at our Torquay vets surgery. This means they can be housed away from dogs and cats if they come in for an operation or have to stay with us for a few days.  This ward includes vivariums, so we can better cater for the needs of tortoises or other reptiles, and an avian (bird) hospitalisation cage.

The British Veterinary Association and Animal Welfare Foundation has produced some excellent leaflets covering the care of rabbits, guinea pigs, and ferrets.  For advice about caring for these or any other pets, don’t hesitate to speak to our team.

As the 3rd most popular pet in the UK there is now lots of excellent health information out there for rabbit owners. We offer annual vaccinations for pet rabbits against Myxomatosis and RVHD (including the new variant RVHD-2). We also offer health checks, nail clips, neutering and rabbit dentistry.  You can read more about how to keep your bunny healthy in our fact sheet, and about the common problem of dental disease in rabbits in this article.

Neutering of pet rabbits
Rabbits are sociable animals and should be kept in pairs or groups to ensure their best welfare. To enable this, but avoid behavioural issues, stop them ‘breeding like rabbits’ (because that’s what they are after all!) and prevent life threatening disease, it is necessary to neuter rabbits. In fact, neutering is considered to be vital for a long and healthy life by the Rabbit Welfare and Fund (RWAF).

Generally speaking males can be castrated from around 10-12 weeks of age if their testicles have descended i.e. when they reach sexual maturity. There is a high risk of potentially life threatening uterine neoplasia (tumour/cancer formation) in unspayed female rabbits – as high as 80% by the time they are only 3 years old (for some breeds) – this can be prevented by neutering females rabbits, which can be done from 16 weeks of age.

Neutering is performed under general anaesthesia. We routinely aim to intubate (pass a breathing tube into the windpipe for oxygen delivery) in rabbits for general anaesthesia, as this benefits your pet by reducing the risks/problems associated with anaesthetics. To make this more practicable, we recommend that they are at least 1kg in body weight at the time of their operation.

After they have recovered from neutering it is usually easier to bond pairs/groups.  For advice about bonding rabbits, check out this link. Remember, a male rabbit may still be fertile for 4-6 weeks after castration, so do not pair/allow contact with an entire female until this time has passed.

The RWAF have produced a useful neutering guide if you would like further information. 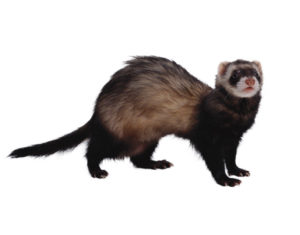 Female ferrets are induced ovulators (similar to cats and rabbits) i.e. the female needs to be mated before she will release an egg. If a female ferret does not ovulate she continues to produce the hormone oestrogen. If she remains in oestrus (i.e. is not mated) for a long enough period, oestrogen reaches toxic levels that then destroy the bone marrow. This means that new blood cells cannot be made (aplastic anaemia) which is likely to be fatal for the ferret.

Historically surgical neutering (or use of a vasectomised male – known as a hobble/hoblet) was recommended to prevent this happening. Entire male ferrets can become markedly pungent (smelly!) and surgical neutering has also been historically advised to help reduce (but not prevent) this. However, it has been known since 2006 that surgical neutering of both male and female ferrets is strongly linked to causing iatrogenic (illness caused by medical treatment) disease of the adrenal glands (hyperadrenocorticism), which can also be fatal. In order to address this problem we recommend the use of hormonal implants for female and male ferrets, rather than surgical neutering. Implant placement is similar to microchip placement, but as the skin on ferrets necks is so tough it can be less stressful to place them under a short general anaesthetic. The implants can be effective for several years, but some individuals may need further implants inserting.

Ian has produced some fact sheets about some of the most common health problems we see in parrots: