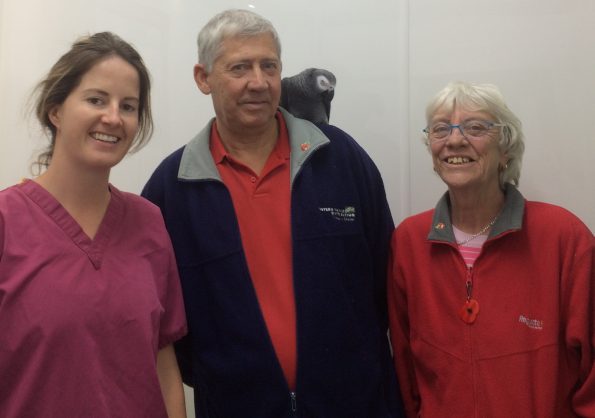 Jingles, the African Grey Parrot, has belonged to his owners for five years, after being rehomed by them at 10 years old. They had been told Jingles was male and never had any reason to doubt this until May this year.

Jingles had been quiet and less talkative for five days, so the owners took him to Greenbay Vets in Torquay. He was examined by vet Dr Samantha Prestwood who detected a discharge coming from Jingles’ cloaca. The cloaca in birds allows the passage of urine and faeces and in a female would open into the reproductive tract. Internal examination revealed an egg and the news that Jingles was in fact female, which came as a surprise to the owners!

Birds can suffer with a condition called “egg bound” where they are unable to pass an egg. Birds are at risk of becoming seriously ill within 24 hours of being egg bound.  Jingles was anaesthetised, and x-rays taken to allow assessment of the egg because an abnormal shape can be a reason a bird is unable to pass the egg. The X-rays also checked for mineral density of the bones, as egg production can lead to a loss of calcium from the bird’s bones. 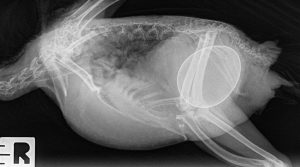 Fortunately, the egg was normal size and shape and whilst relaxed under the anaesthetic the egg could be extracted using gentle manipulation. Jingles made a full recovery and went home later that day with a calcium supplement to improve her bone density which was slightly low.

It is unknown what exactly triggers birds to start laying, usually lifestyle or husbandry changes have occurred but in some it is difficult to pinpoint the cause. Once birds start to lay eggs, they can do so every two days, which can be dangerous due to the amount of energy given to the egg production. Unfortunately, Jingles was presented for similar signs a week later and was seen by Dr Ian Sayers, who runs an exotic pet clinic at Greenbay Vets. Repeat x-rays revealed another full-sized egg, which was again removed under general anaesthesia. Dr Sayers was also able to advise the owners on some husbandry changes that can be trialled to prevent or delay the formation of another egg.

So far so good with no more eggs from Jingles, who is back to behaving normally.