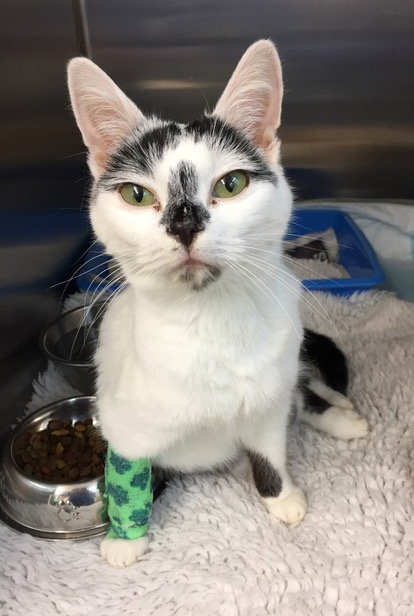 We all know our feline friends are very agile on their feet but sometimes even they can be caught off guard. Nellie only fell from a height of a metre, but she didn’t have time to correct herself mid flight and land on her feet.  Unfortunately poor Nellie landed badly and we suspected she had broken her leg when she came in as an emergency to our Torquay surgery.  She was admitted for further investigation; the photo above shows her settling in at the surgery, probably feeling rather shell-shocked bless her.

X-rays confirmed that Nellie had broken her tibia (or shin bone). Nellie had an oblique, or diagonal, fracture. When a bone is completely broken it is very unstable because of the many forces acting on it.  In order to heal, a bone needs to be held very stable so the two ends can fuse together. We often use a metal plate to mend broken bones in our patients; to attach the plate to the bone there is a line of screws along it that are implanted into the bone either side of the fracture.

Nellie is only 2.5kgs and her fracture was in several pieces, with one of the pieces too small to safely use a bone plate. We decided the best way to manage Nellie’s fracture was to use an external fixator device (ex fix). This is a device that sits around the outside of the leg with the broken bone, in the form of metal bars alongside the bone or circles around the bone. Pins are connected to this frame that run into the bone and stabilise the fracture. The advantage is in small patients we can use a circular shaped frame and can run multiple pins through the same point along the bone whereas a plate doesn’t have this option. The disadvantage is the animal has to walk around with the frame until the fracture heals. 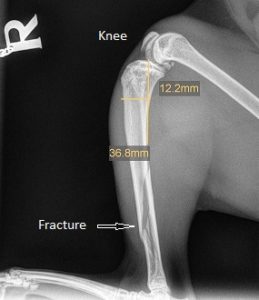 We ordered the smallest frame available for Nellie, in a material called titanium, which is lighter than stainless steel. Vets John and Sam both operated on Nellie because assembling the frame can be very fiddly, but the surgery went smoothly. We often utilise two vets for many of our difficult operations requiring a lot of equipment. We repeated the x-rays after the operation to confirm the pins were in the correct place and the fracture was likely to heal. Nellie is a very spirited cat and she quickly recovered from her surgery and began to use the frame very well. 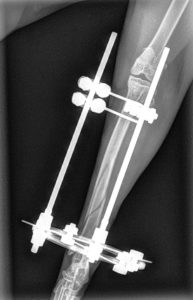 In order to keep animals resting the leg we have to confine them to a cage or they would risk overdoing it and possibly re fracturing their bone. We would then need to remove all of our implants and replace them all under general anaesthesia. We saw Nellie regularly to check the wounds that had been created from the pins running into the bones. Nellie and her owners were excellent at following their strict instructions.  No cat enjoys being on cage-rest, but it leads to a much speedier recovery and more successful outcome! 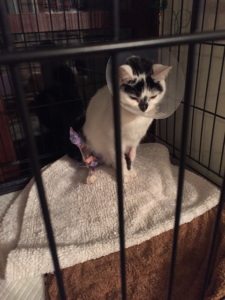 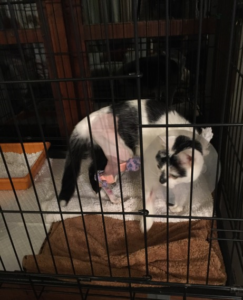 After six weeks of cage rest we were able to remove part of Nellie’s frame which made the system lighter and with fewer pins. Two weeks after this we repeated our x-rays and could confirm the fracture was healed.  Nellie was very pleased to have all the metal work removed from her leg. We advised two more weeks of cage rest because the bone would still be weaker at this point but once she started using it normally it would quickly strengthen.

Nellie is doing very well and we hope she doesn’t have any more accidents!  Here she is enjoying life post-recovery, and very pleased to be out of her cage we are sure! 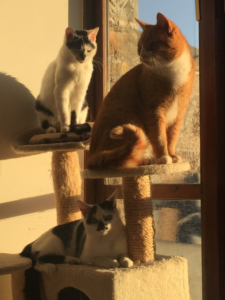